and dares to claim the sky.

so he opens his throat to sing.

The caged bird sings  /  with a fearful trill  /  of things unknown

for the caged bird sings of freedom.

and he names the sky his own

so he opens his throat to sing.

The caged bird sings /  with a fearful trill  /  of things unknown

for the caged bird sings of freedom.

The caged bird sings of freedom.  Oh man, that line stops my heart a little.  I can’t read this poem without picturing 8-yr-old Maya telling the story of her life, and my heart aches with brokenness and sorrow at the memory of her struggle. But it also holds on to hope and grace, because the caged bird DID sing. Because the little 8-yr-old refused to let anyone else author her destiny — and her beauty and her courage and her LIFE created this significant, lasting, unimaginable legacy. I share the sentiment of much of the world as we mourn the passing of a magnificent light, and am grateful she fought so hard to be heard.  Grateful I had the opportunity to hear her.

But today, reading these words, I also can’t help but think of my boy, whose wings are clipped and feet are tied. And the millions of other boys and girls who stand on the grave of dreams, longing for things unknown. For a family, for love, for a life worth living.

Honestly, as I keep trying to write down how I feel about all of this, or even just explain some of the basics, words escape me. I want to pull up other blogs to show you – I want you to read everything I have read and see everything I have seen. Then maybe you will understand how we got here. Why my heart breaks for these babies, singing of freedom against all odds, defying bars of rage. I don’t feel like my words will be adequate enough to honor these children. I don’t think I have it in me articulate so many emotions.

To start, we can talk about children with disabilities in Russia and Central and Eastern Europe. The fall of the Soviet Union left many nations struggling with independence and financial instability. Thirty-five percent of the population lives below the poverty line. Combined with years of ignorance about disabilities, centuries-old social stigma, and misinterpreted religious dogma, a culture has been created that sees children with disabilities as worthless. Literally, not worthy of life.  Think about that for a minute. In Asia, there are similar issues, but added factors are the one-child policy in China, and the cultural preference for having a male child (who will care for you in old age). Giving birth to a child with Down Syndrome (or any other disability) is financially and culturally crippling. No one will offer a voice of hope.  No one will offer help. It is more common to abandon a baby with Down Syndrome that it is to keep him/her. (I don’t say this to judge. I have also read that in the U.S. 90% of pregnancies diagnosed with DS are terminated. These are just facts. This is just the reality of the situation).

If not terminated, left for death at birth (or killed), these children are placed in baby homes. As true for any country struggling with extreme poverty, these orphanages are underfunded and understaffed. Even the best baby homes will struggle with proper nutrition and medical care (because let’s be honest, if there is a cultural mindset that says this “type” of child is a burden, void of hope and unworthy of a future, top-notch medical care (early intervention, therapies, etc) is not going to be a priority. Not to mention how much stimulation the child misses from the natural attention of a parent. After a certain number of years (it seems to vary from 4-8ish), the child is transferred. Usually to an adult mental institution, where they often don’t make it through a year. Here are some before and afters of children who “aged-out” of baby homes and into institutions:

They are often given adult dosages of sedation drugs and then left in cribs.  Period.  Forever.  I think this post does a good job of summarizing the common scenario.

But let’s be honest, even for children without disabilities, or even minor disabilities, aging out of the system later (in your teens), doesn’t offer much more hope. Most of the children end up being used in various illegal activites, most commonly drug and sex trafficking. Older children have spent their entire lives waiting for someone to come for them. I have read a number of families’ blogs who have taken a chance and adopted teenage boys – boys who still long for a mama to love them and a family to call their own. In China, children are unavailable for adoption after they turn 14. This birthday is no celebration for these children, who have forever lost their chance to be called son or daughter. I have read (and can’t find right now, I’m sorry! Just start Googling and don’t stop!) letters from children begging for a family, for a chance, for someone, ANYONE, to just believe in them. How can we not see their faces in Maya’s Angelou’s words?

Go to Reece’s Rainbow.  Look at all the caged birds.  Watch this documentary about Ukraine’s forgotten children (okay, okay, I know it’s long, but save it for slow night…knowledge is power).  We have to hear them singing, and we have to be willing to do something…anything. I have more good videos on my FAQ – The Heart.

This is Dusty, who weighed only 20 lbs when he came home and went right to the hospital for malnutrition. Only 10 months later, Dusty looked awesome at 30+ lbs. 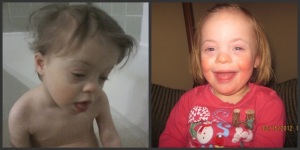 Belle was adopted when she was 3, and little miss weighed only 15 lbs. Thirteen months later, this beautiful soul was up to 26 lbs and filled up with love.

You can also watch a SHORT clip about the Cox family, who brought home Mia home from Ukraine in 2011.

These children aren’t worthless.  They deserve to claim and name the sky just like any other child. To dream, to laugh, to love.  But we have to believe that.  Really believe that.  We have to be willing to do something about it.

But a caged bird stands on the grave of dreams his shadow shouts on a nightmare scream his wings are clipped and his feet are tied so he opens his throat to sing.

3 thoughts on “I Know Why the Caged Bird Sings”